I’ve been asked a couple of times which rules from 5150 Fighter and Carrier command have I adopted and which ones have I let go.
I pulled together the following table to try to shop fairly simply what I’ve been using. You can see that I’ve acutally not used a fair few of the rules, mainly to reduce complexity and make the game a bit easier to post.

[Activation: Star Navy 4, Hishen 1 – Hishen moves first followed by the Star Navy. Star Navy activates first followed by Hishen. All ships are active.]
[Hishen movement phase]
With her Captain dead and her bridge smashed the remaining crew of Exeter are unaware of the torpedo attack. The two deadly missiles gracefully and silently pass by her anti aircraft gun zone without a shot being fired and slam into the Frigate.  As her Hull is breached from the first torpedo, more of Exeter’s crew are killed. The second damages her Engine reducing her maximum speed. Still, by a miracle of the gods, the Exeter holds together.
The three transport ships move forward one cycle.
With her Thrusters damaged, the heavy cruiser Emden cannot turn. She maintains her current velocity and moves forward two cycles.
The Destroyer Yorck maintains her velocity of two cycles and continues to close the gap towards Warspite. She moves forward two cycles.
The Patrol Ship Van der Tamm accelerates to two and a half cycles and moves forward two cycles.
The Millennium Falcon accelerates to four cycles and moves forward four cycles and turns to starboard one aspect.
Of the small craft, only the X Wing and Darkest Star are In Sight and dogfighting range and they will act in that order. 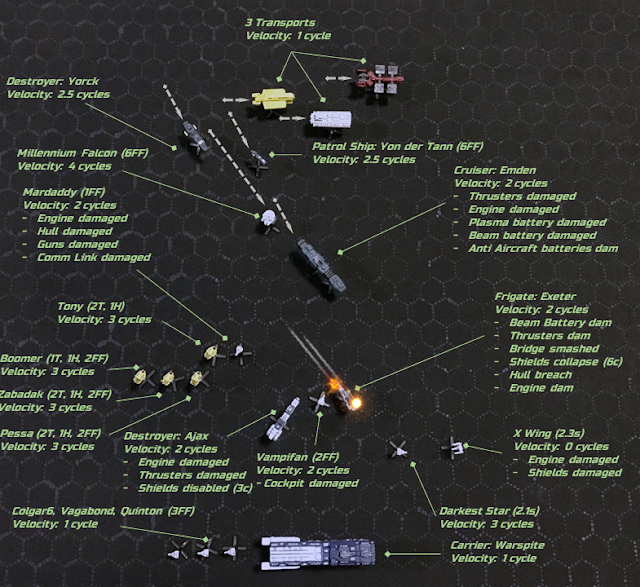 The X Wing gets in the first shot. Of the eight pulse cannon rounds that stream towards Darkest Star, two of them are on target and one punches through the Vipers shields straight into the cockpit. Darkest Star is rendered unconscious. His velocity slides to nil as he remains in the sights of the X Wing. 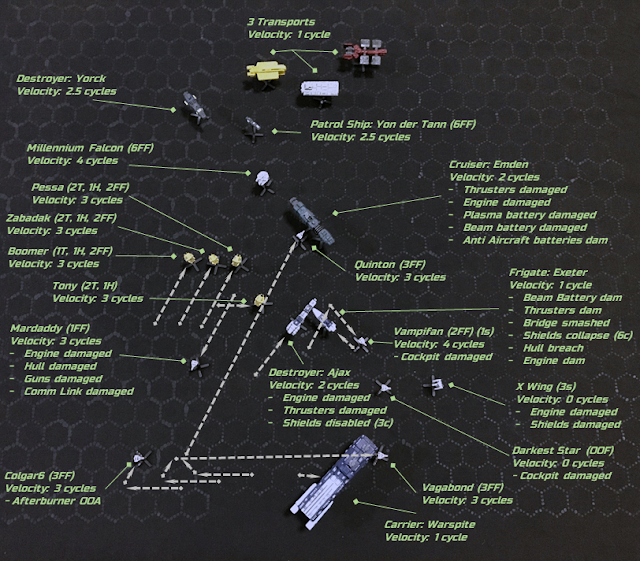 Vampifan, the X Wing, Darkest Star and Vagabond are all In Sight but Darkest Star is currently unconscious and Vagabond used his afterburners so neither of them can participate in the dogfight.
The X Wing pilot is the first to react. With no velocity he has limited options but Vampifan is in his arc of fire so he decides to simply put a burst his way. Two of the rounds are on target and both penetrate his shields. They damage his engine and gun systems. 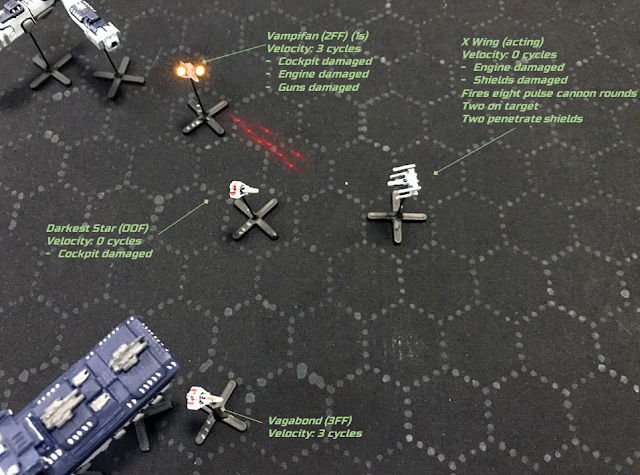 With his guns damaged and the air frame of his Viper now having taken multiple hits, Vampifan is practically combat ineffective. He has saved Darkest Star from being blown away by the X Wing but in doing so has put himself in grave danger.
Keen to put himself out harms way, he side slips two cycles to port, placing himself out of arc of the X Wing.
[Star Navy activation]
Darkest Star shakes his head as he starts to come too. Groggily he starts to get his bearings but can’t act this turn.
Warspite fires twenty anti aircraft rounds at the X Wing. The enemy fighter is a sitting duck and with a velocity of zero and with damaged shields his craft is hit thirteen times. The craft evaporates into a million tiny pieces.
Warspite also fires her four beam batteries at Emden. One of the rounds is on target and penetrates Emden’s shields, breaching her Hull. The Emden is almost a floating wreck with her thrusters, engine, plasma, beam and anti aircraft batteries all damaged and now her hull is breached. 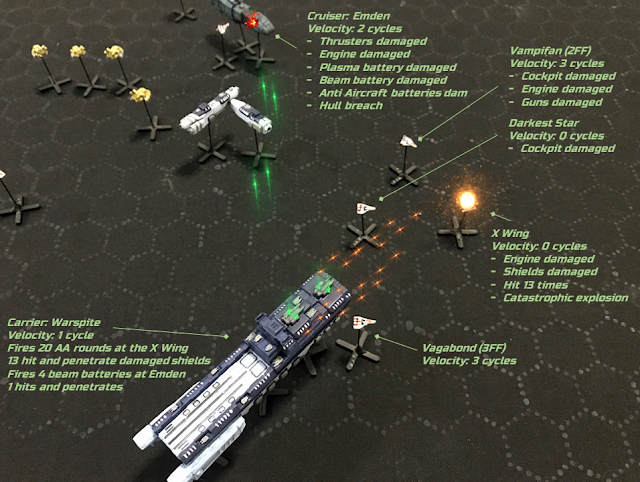 Whilst Exeter’s beam battery is out of action her projectile battery is still operational. She fires a heavy slug at her opponent and despite her bridge being smashed and her hull being breached she is still able to get the round near the enemy cruisers hull. But Emden’s shields hold and she doesn’t suffer any additional damage.
Ajax fires a plasma battery which misses and a beam battery which impacts near Emden’s hull but again her shields hold. 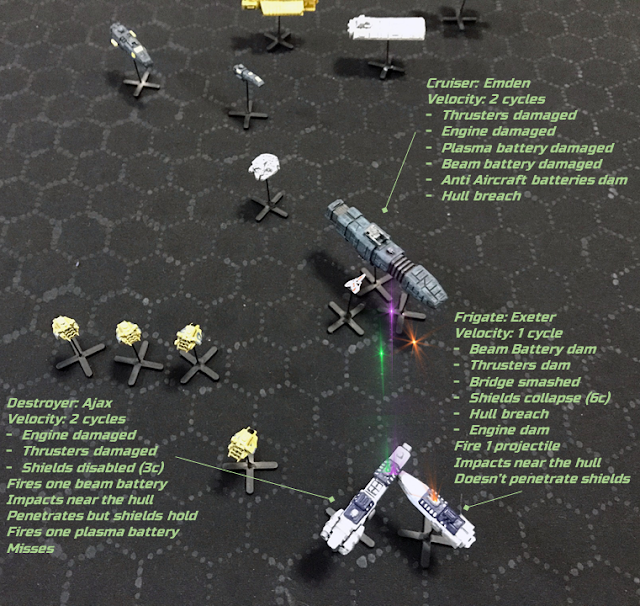 Tony fires a torpedo at Emden. With no anti aircraft defence the missile slams home smashing her bridge and killing her capitan. Whilst the ship is still operational she is a literal wreck.
Pessa fires a HARM missile at the Millennium Falcon hoping to disable her anti aircraft batteries before she gets a chance to fire but the wily rebel pilot, Han Solo, evades the missile.
As Zabadak turns he fires a HARM missile at Yorck. He targets Yorck’s sensors, trying to blind the enemy destroyer. Yorck uses her counter measures to try to evade the missile but they are ineffective. The missile hits home and Yorck’s long range sensors are damaged meaning that she can only fire at ships that she can see within five cycles.
Boomer fires his last torpedo at Yorck. As the torpedo enters visual range Yorck’s anti aircraft batteries erupt spewing forth ten rounds at the missile which destroys the torpedo.
With Emden’s shields still operational, Quinton cannot damage the enemy cruiser. 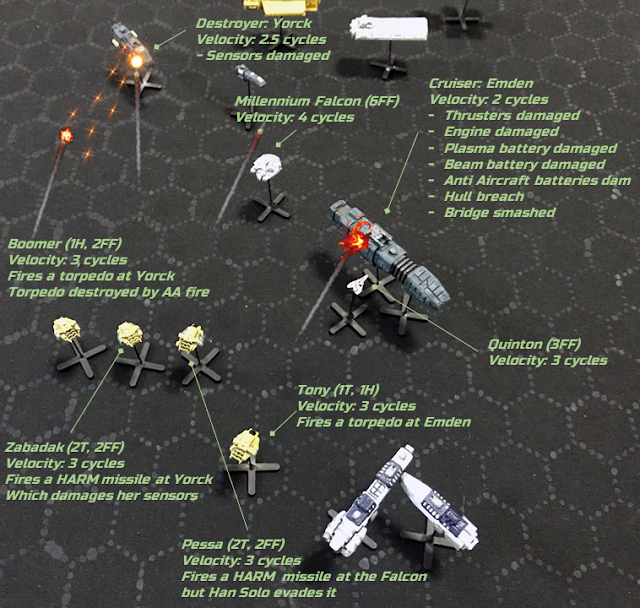 [Hishen activation]
With her sensors damaged, the destroyer Yorck cannot target any Star Navy ships.
All of the weapons on the cruiser Emden are damaged but her damage control personnel work furiously away trying to bring her systems back on line. They focus on her thrusters, hoping to get her mobility repaired so that she can attempt to turn and get away from the fight. They fail to repair the thrusters this cycle but they’ve made progress and they will be repaired next cycle.
The Millennium Falcon fires her two anti aircraft batteries and a fire and forget missile at Pessa. Ten anti aircraft rounds rain down towards Pessa and three are on target but only one penetrates. The Raptor’s shields flicker as they go down.
As the fire and forget missile approaches Pessa he skilfully throws the Ratpor to the left and the right and dodges the projectile.
Van der Tann fires a fire and forget missile at Zabadak. Zabadak doesn’t see the missile till too late and it slams into his Raptor damaging his guns and penetrating the cockpit. Zabadak is stunned by the force of the blow and his velocity drifts to zero as he loses control of the ship. 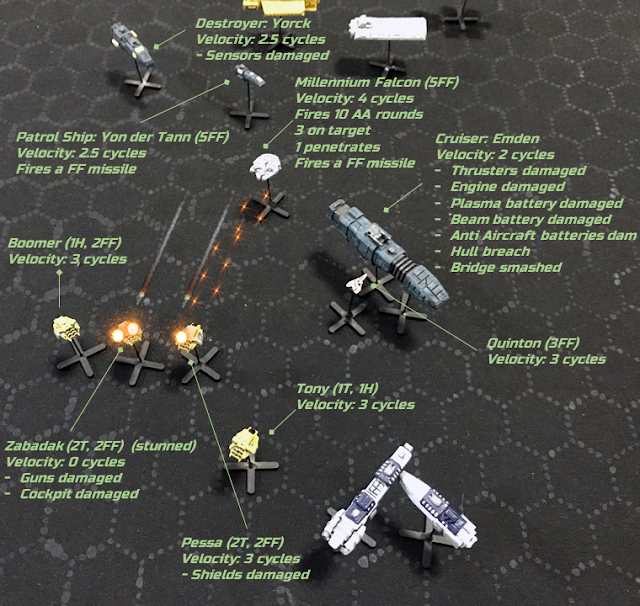 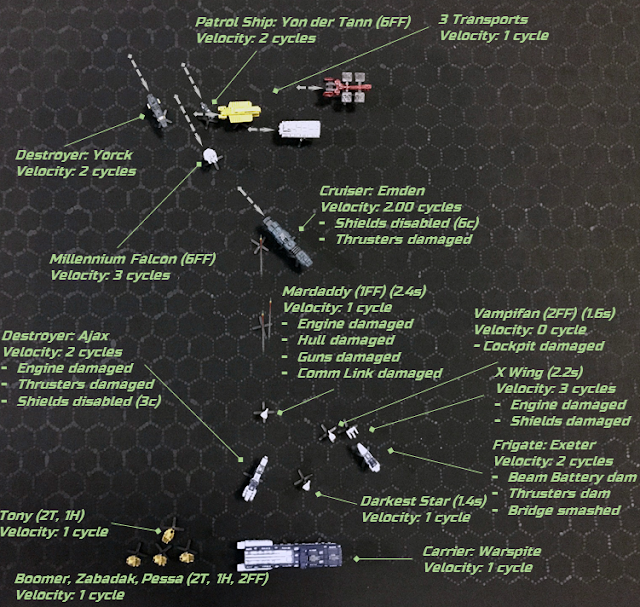 With his ship so heavily damaged Mardaddy just tries to get out of the combat zone. He side slips one cycle to port.
The X Wing pilot cannot pull off a dogfighting manoeuvre and instead must avoid a collision with Exeter. He accelerates to four cycles a side slips three cycles to port, trying to put more distance between himself and the defending Vipers.
Vampifan hasn’t as yet had the opportunity to re-fire his engines and with nil velocity he can’t effect any combat manoeuvres.
Similarly Darkest Star is out of range as he has no missiles left and he cannot get into gun range with his current velocity of one cycle. He moves forward one cycle and turns to starboard one aspect, keeping the X Wing in sight.
[Ships can only accelerate during their own movement phase and whilst the Star Navy ships involved in dogfighting can manoeuvre during the Hishen movement phase they cannot accelerate. The Star Navy Vipers are suffering from a lack of velocity, damaged ships and a lack of munitions.] 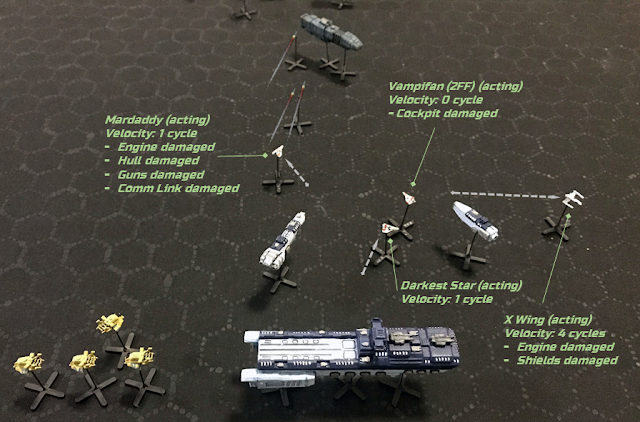 [Star Navy movement phase]
Three Star Navy torpedos catapult towards the Emden. The enemy capital ship Braces for Impact as she fires all three defensive anti-aircraft batteries at the incoming missiles. Three hits are scored but none destroy the incoming missiles. Heavy damaged is sustained with the Engine, Shields and Plasma Batteries all being damaged. The ship is still in the fight but she won’t last long.
[The Brace for Impact result from the Incoming Torpedoes reaction test means that all anti aircraft batteries can be fired and the damage from torpedoes can be reallocated. This enabled the Capitan of the Emden to shift the damage around and avoid a catastrophic result but his ship is heavily damaged as a result.] 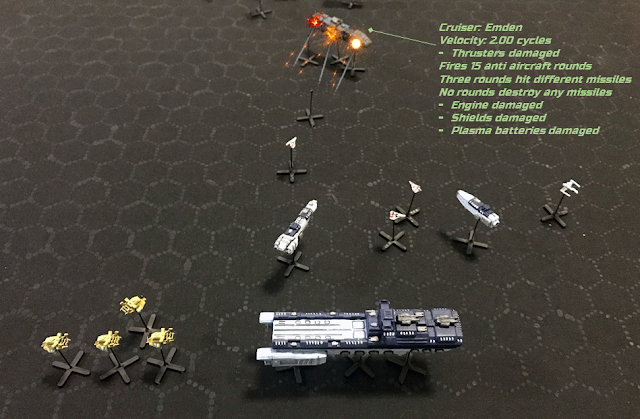 With her Thrusters and Engine damaged Ajax can do little but move forward two cycles.
Similarly with her Thrusters damaged and already at maximum velocity Exeter can do little but move forward two cycles.
Out of sight of any enemy fighters Mardaddy hopes he is also out of mind. He accelerates his damaged ship to two cycles, moves forward one cycle, turns to port two aspects, moves forward another one cycle and turns to port one more aspect.
Tony accelerates to the Raptors maximum velocity of three cycles and side slips two cycles to port and hits the afterburners which propel him another five cycles.
Boomer accelerates to three cycles and moves forward two cycles, turns to starboard one aspect, moves forward one cycle, turns to starboard one aspect and hits the afterburners propelling him a further six cycles. Zabadak and Pessa follow Boomers lead and also use their after burners to get to engagement range quicker.
Warspite moves forward one cycle and launches three Vipers. Colgar6, Vagabond and Quinton are deployed from the flight deck. Jackie knows that he only has Apollo, Old Sarge and The Addict in reserve with Da Gobbo being held in temporary storage in Exeter to make space for the fourth Raptor.
Vampifan, the X Wing and Darkest Star are In Sight and Dogfighting range and will move in that order. 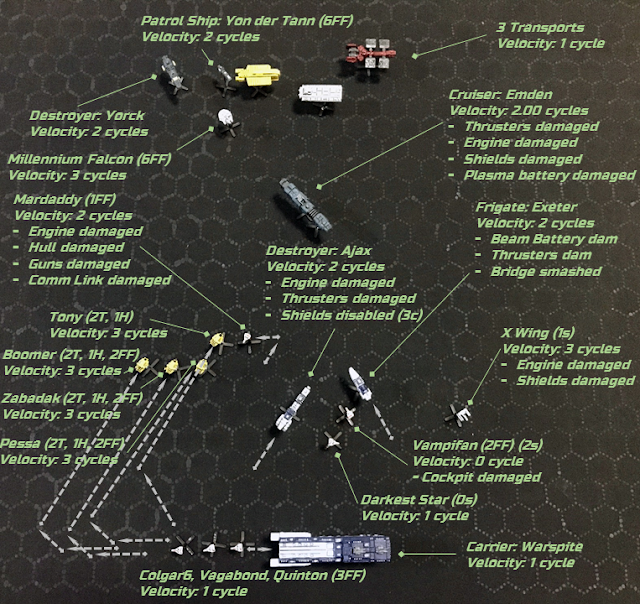 Vampifan pushes his Viper to two cycles of velocity. He attempts a Yaw Reversal but he can’t pull it off. His fighter moves forward one cycle and turns one aspect to starboard.
The X Wing pilot attempts a Dead Man’s Turn to attempt to get Darkest Star into his sights. He pulls off the manoeuvre, moves forward one cycle and turns to starboard two aspects before coming to a dead stop. Unfortunately for him, whilst he has Darkest Star in his sights, he is out of range.
Darkest Star accelerates to three cycles and barrel rolls forward three cycles. He hammers at the Rail Gun trigger sending fifteen heavy velocity rounds towards his opponent but the X Wing pilot must have nine lives as none of the rounds are on target. 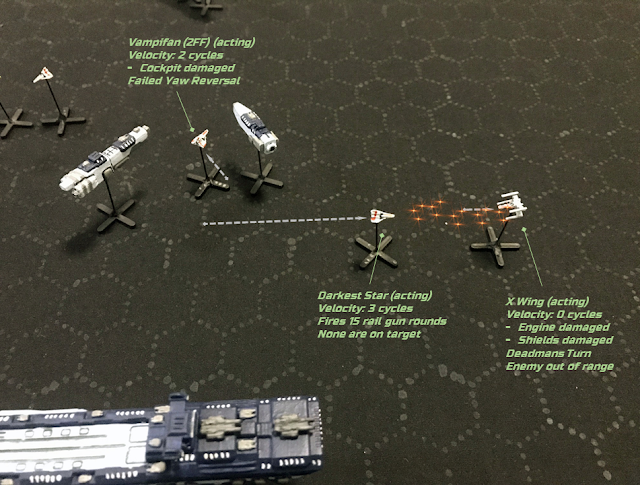 [Star Navy Activation – only Boomer and Warspite are active]
Warspite fires her four Beam Batteries at Emden. Three of the rounds impact near the hull but do no damage. The fourth slams into Emden damaging her Beam Batteries.
Boomer tries to finish the heavy cruiser and releases a torpedo. As it speeds towards the Emden her Capital once again Braces for Impact. Fifteen anti aircraft rounds engage the missile and two are on target but they fail to take the missile out.
The torpedo crashes home damaging Emden’s anti aircraft battery. 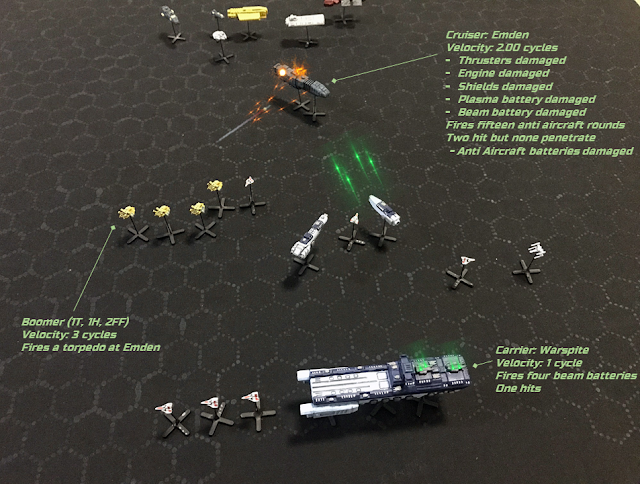 [Hishen activation – all ships are active but only Emden, the Destroyer York and the X Wing are in range]
Emden’s damage repair crews jump into action and promptly repair her shields.
York fires two torpedo’s and two plasma batteries at the now in range Exeter. The torpedoes speed towards their target but won’t impact until next cycle. One of the plasma rounds misses but the other explodes next to the hull, collapsing Exeter’s shields for six cycles.
Darkest Star has flown right into the sights of the X Wing pilot. He opens fire, sending eight pulse cannon rounds at the Viper. One is on target but it fails to penetrate Darkest Star’s shields. 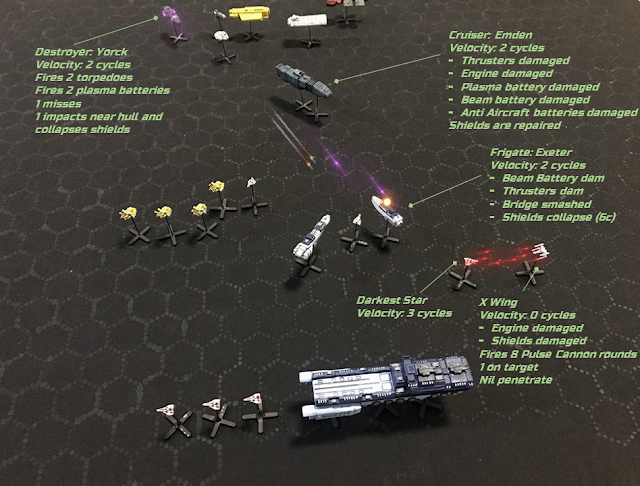